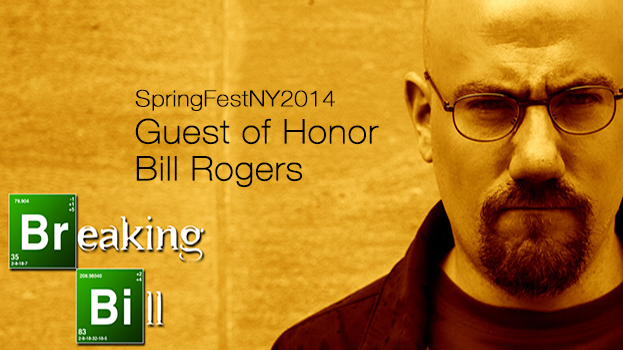 We’re thrilled to announce that veteran voice actor Bill Rogers will be making his return to SpringFestNY this year as a guest of honor!

Since his debut in “Assemble Insert” back in 2001, Bill has been providing voices to some of your favorite characters in some of your favorite shows. If you’ve watched “Ikki Tousen”, “The Third”, “Shingu”, “KO Beast”, “His and Her Circumstances”, “Magical Witch Punie-Chan”, “Joe vs. Joe”, “Madara, “To Heart”, “Kujibiki Unbalance”, “Queen’s Blade”, “Gokudo”, or “Comic Party” you’ve probably heard his voice. But he is best known for his work in “Gravitation” (Touma Seguchi), “Boogiepop Phantom” (Yamamoto), and “Genshiken” (Tanaka Souichiro). He can also be heard on Saturday mornings as the voice of Brock in “Pokémon”, (as well as over 40 creatures that appear in the show).

In the world of video games, Bill has lent his voice to the X-Box game “Bullet Witch”. On the Wii console he voiced cartoon legend Heathcliff in “Heathcliff: Fast and the Furriest” as well as supplying the voices for Red, Yellow and other fun characters in the “m&m Adventure” and “m&m Kart Racing”. On mobile devices he can be heard in “Dungeon Hunter 4” and “Gangstar: Vegas” by Gameloft. He has also voiced various Pokémon in the game “Poképark” and it’s sequel “Poképark: Wonders Beyond”. But fans best know him as the legendary Lucario in the smash hit “Super Smash Bros. Brawl”.
Outside of the anime & video game field, Bill has worked with English dubbing groups for live action and animated programs from Italy, Korea, India and Turkey. He has also been seen on stage in various theatre productions and has worked on numerous independent films. He can also be heard in audiobooks “The Privilege of the Sword” and “The Fall of the Kings” available on audible.com.